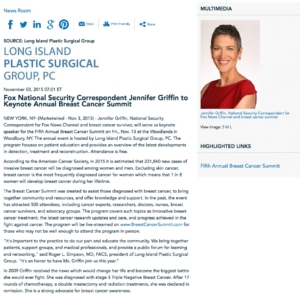 NEW YORK – Jennifer Griffin, National Security Correspondent for Fox News Channel and breast cancer survivor, will serve as keynote speaker for the Fifth Annual Breast Cancer Summit on Fri., Nov. 13 at the Woodlands in Woodbury, NY. The annual event is hosted by Long Island Plastic Surgical Group, PC. The program focuses on patient education and provides an overview of the latest developments in detection, treatment and reconstruction. Attendance is free.

According to the American Cancer Society, in 2015 it is estimated that 231,840 new cases of invasive breast cancer will be diagnosed among women and men. Excluding skin cancer, breast cancer is the most frequently diagnosed cancer for women which means that 1 in 8 women will develop breast cancer during her lifetime.

The Breast Cancer Summit was created to assist those diagnosed with breast cancer, to bring together community and resources, and offer knowledge and support. In the past, the event has attracted 500 attendees, including cancer experts, researchers, doctors, nurses, breast cancer survivors, and advocacy groups. The program covers such topics as innovative breast cancer treatment, the latest cancer research updates and care, and progress achieved in the fight against cancer. The program will be live-streamed on www.BreastCancerSummit.com for those who may not be well enough to attend the program in person.

“It’s important to the practice to do our part and educate the community. We bring together patients, support groups, and medical professionals, and provide a public forum for learning and networking.” Said Roger L. Simpson, MD, FACS, president of Long Island Plastic Surgical Group. “It’s an honor to have Ms. Griffin join us this year.”

In 2009 Griffin received the news which would change her life and become the biggest battle she would ever fight. She was diagnosed with stage 3 Triple Negative Breast Cancer. After 17 rounds of chemotherapy, a double mastectomy and radiation treatments, she was declared in remission. She is a strong advocate for breast cancer awareness.

“Programs such as this Breast Cancer Summit are vitally important resources for those touched by this disease,” said Griffin. “I am honored to be a part of such an important event that attracts hundreds of attendees and experts who share insight and information with the public.”

Griffin joined Fox News Channel (FNC) in October 1999 as a Jerusalem-based correspondent. Since 2007 Griffin has reported daily from the Pentagon where she questions senior military leaders, travels to war zones with the Joint Chiefs and Secretaries of Defense, and reports on all aspects of the military.

To reserve your spot, visit www.BreastCancerSummit.com – but hurry, seating is limited and registration will close once capacity is reached.