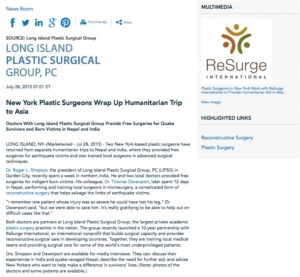 “I remember one patient whose injury was so severe he could have lost his leg,” Dr. Davenport said, “but we were able to save him. It’s really gratifying to be able to help out on difficult cases like that.”

Both doctors are partners at Long Island Plastic Surgical Group, the largest private academic plastic surgery practice in the nation. The group recently launched a 10-year partnership with ReSurge International, an international nonprofit that builds surgical capacity and provides reconstructive surgical care in developing countries. Together, they are training local medical teams and providing surgical care for some of the world’s most underprivileged patients.

Drs. Simpson and Davenport are available for media interviews. They can: discuss their experiences in India and quake-ravaged Nepal; describe the need for further aid; and advise New Yorkers who want to help make a difference in survivors’ lives. (Note: photos of the doctors and some patients are available.)

Dr. Simpson visited Dehradun, which is about 160 miles north of New Delhi. Many of his patients had been burned as children. Because their injuries were not treated appropriately, their wounds developed into disabling scar contractures and rendered their hands and arms immovable. The patients Dr. Simpson saw were getting their disabling injuries treated 25 to 30 years later, finally restoring their ability to move their hands and arms. “It’s so gratifying to be able to help them after all this time,” he said.

Burns are the ninth-leading cause of disability in India for working teens and adults ages 15-49. Hand burns are unfortunately common because many families cook over an open flame or fry in cooking oil that can spill. For workers who make their livings through manual labor, a severe hand injury can mean the end of their wage-earning potential. That’s why ReSurge and LIPSG’s expertise is so helpful — the teams excel at reconstructing damaged hands, and also at releasing the burn contractures that result when scar tissue causes a limb to become immovable.

One of Dr. Simpson’s recent patients was 18-year-old Heena. She burned her hand and foot as a toddler, and her burn scars caused three fingers to retract backward toward her wrist. Dr. Simpson surgically released the contractures, and now Heena is expected to regain use of the hand.

Established in 1948, Long Island Plastic Surgical Group is considered to be a pioneer in the field of plastic surgery. The team is not only the largest but also the longest-running private academic plastic surgery practice in the country. With a total of 19 plastic surgeons at the practice, LIPSG offers its patients more than 250 years of combined surgical experience. The practice operates nine specialty centers: Non-Invasive and Surgical Facial Rejuvenation; Skin Care and Age Management; Breast and Body Cosmetic Surgery; Breast Reconstruction Surgery; Post-Weight Loss Cosmetic and Reconstructive Surgery; Facial Reanimation and Peripheral Nerve Repair; Microsurgery and Hand Reconstruction; Burns and Complex Wound Management; and Pediatric Plastic and Craniofacial Surgery. The surgeons at LIPSG are available for interview upon request.

The practice can be reached online at lipsg.com or facebook.com/liplasticsurgical.

ReSurge International, formerly named Interplast, is dedicated to building surgical capacity in developing countries, as well as providing reconstructive surgical care for those living in poverty. The organization aids the health of 3,000 people every year, which gives them the ability to go to school, provide for their families and simply be productive members of society. Since 1969, ReSurge has provided more than 105,000 surgeries to people living in developing countries.